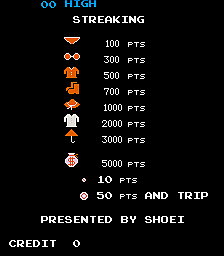 Streaking is a 1981 Maze game from Shoei with mechanics superficially similar to Pac Man. You run around a maze eating dots and avoiding enemies trying to catch you, only in Streaking the enemies are cops and you're playing a naked woman.

There are a few twists that make the game unique; instead of power pellets in the four corners of the maze there are single-shot teleporters that zap you to the opposite corner when used, and instead of fruit or pretzels you collect clothing items to dress yourself. This doesn't make the police chasing you any more inclined to let you go, of course, but it does make the game slightly less embarrassing to play if your parents are watching.

There's a mechanic to the dots as well – while your ultimate goal in any board is to collect them all and move on to the next identical maze, you also accrue fatigue as you run around – max out your fatigue bar and you'll lose a life just as if the cops had caught you. Eating helps relieve the bar.

As far as the art and music go, it's far less charming than 1981's Ms Pac-Man, the game we have to compare it to, though also presented in a cartoonish "kawaii" style. The maze feels less well designed, and gameplay is a little rough – you can't tell the police apart, so there's no strategy possible based on their AI – if they even have individual AI.

I'd give the game a higher rating if there was some variation like clothing making you slower but the cops less interested in chasing you, but there isn't. It's just a sub-par maze chase game with a mildly salacious theme, so I give it a D ranking.