Today's game is Devil World for the Famicom, a Nintendo published title that never saw a US release due to Nintendo of America's hardline stance against religious and occult iconography. Designed by Miyamoto it was his first console-only release and the only game of his not to see a North American distribution.

In Devil World the player controls Tamagon, a green dragon attacking "the Devil's World", opposed by the devil and his minions. The game is a top-down maze game with two phases; in the first, the player gobbles up dots as he evades or fights the devil's minions, and in the second he tries to bring four bibles to the central location to complete the level.

Complicating matters are two fairly unique gameplay twists for the maze game genre. First, Tamagon can't actually eat the dots until and unless he grabs a cross first – the cross also allows him to breathe fire at the enemies he encounters. Without the cross the dragon is helpless and can't actually consume dots to complete the level.

In the second part of each stage there are no dots or crosses, so you simply have to avoid the enemies while bringing the bibles to the central hub.

The other and more compelling gameplay element is that the devil controls the game's scrolling, dancing and pointing to compel his minions to move the game window in the four cardinal directions. This is where the game's real challenge comes in – not only do you have to wait until the screens scrolls to collect dots or bibles, but if you're trapped between a wall and the edge of the screen when it scrolls, you'll lose a life.

In the bonus stages, you control the scrolling by stepping on different arrows to change its directions, but as you can't attack the enemies here you have to carefully plan your paths as the shifting screen changes the maze layout.

The big question though, and the only one that matters is: does it work? Miyamoto is, as always, full of ideas, and these ideas complicate the fundamental simplicity of the maze chase genre in a way that doesn't quite enhance the title, but which doesn't really doom it either. Would it have been better with a simpler, cleaner concept? Maybe eliminating the second phase of each stage, or the limitation of needing the crosses to consume dots? Maybe.

Still, the core conceit of a scrolling maze where the bad guys control the scrolling is a solid one, and overall this is a decent implementation. I give Devil World a B-. 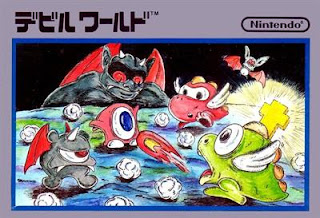 Email ThisBlogThis!Share to TwitterShare to FacebookShare to Pinterest
Labels: 1984, B, Famicom