Nuts and Milk is a puzzle platformer released by Hudson Soft first for the Microsoft MSX computer in Japan and Europe in 1983, and then in Japan for the Famicom console in 1984, which is the version we're covering today. It was ported to the Commodore 64 as Hot Pop in 1985, but that was only released in Australia and the UK.

In Nuts and Milk you play as Milk, a weird sort of pink blob trying to rescue his fiancee Yogurt from the teal blob Nuts. This is accomplished by collecting all of each single-screen stage's fruit while avoiding obstacles and your rival Nuts, multiples of whom might be encountered in later stages.

The structure of each stage is made of different climbable ropes and chains along with platforms
and trampolines. There are 50 different variations, and players can freely skip levels by pressing the select button. There's also a level select mode that allows you to construct your own challenges.

In terms of controls Milk can jump a short distance horizontally and vertically and use stage elements like trampolines to boost his traversals. If you fall too far you'll be stunned briefly, and can press the jump button to recover.

Nuts's AI pathfinding is fairly elementary; he tries to find the shortest, most direct path to you at all times. He can be lured into falling off the screen temporarily, but will come back after a short time.

Ultimately Ntus & Milk is a very elementary puzzle platformer with a few twists and a difficulty based entirely on how good you are at this kind of game. In my case, the answer is "not very", but using the level select allowed me to see a good portion of the game. And like in a lot of early games, there is no ending – even if you play and beat all fifty levels in one go, that just brings you back to the first to go through it all again.

While it would have been a welcome addition to Nintendo's launch titles in the US in 1985, providing a bit of variety, ultimately Nuts & Milk is decidedly average and deserving of a C ranking. 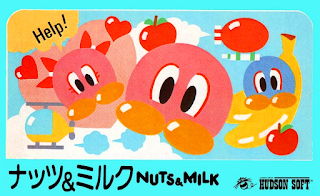