Jagd auf Diamanten-Frisco – translated as Hunt for Diamond Frisco – is a puzzle game that involves the player sliding blocks around in an attempt to match up the flashing tiles while avoiding the enemies. From the manual that came with the creatively titled Square Game variant: 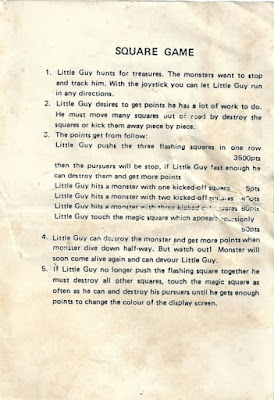 You get 5-80 points per monster killed, 80 points for touching the magic square that appears occasionally, and 3500 for pushing the three magic squares together into a row. This also causes the monsters to stop moving, and loads the next level.

So yeah, this is like that Harry Potter Golden Snitch thing where one of the things you can do earns so many points as to make every other possible point-gathering activity irrelevant. Except, yeah, you want to crush the monsters otherwise they'll quickly trap and kill you.

The game plays... sort of like Pengo. You're sliding blocks around. But here the goal is to match three in a row, and since your control is somewhat limited you've got to plan that out a bit. If you do get them in a position where they can't be brought together – along different walls, say – the manual does say if you earn enough points it'll advance you to the next level. Given how few points any other action gives you, though, that seems like a real pain.

Jagd auf Diamanten-Frisco is fun, but it's hard. You don't really have a lot of room to maneuver, and the enemies are only taken out for a short time... getting positioned to align the flashing squares only gets harder in subsequent rounds. This doesn't make it a bad game, just... tricky.

I give Frisco a B rating.

Email ThisBlogThis!Share to TwitterShare to FacebookShare to Pinterest
Labels: 1983, Atari 2600, B