Sea Monster was n "bomber" style game released in 1982 for the Atari 2600 by European publisher Bit Corporation. Almost immediately it brings to mind classic arcade games Depthcharge and Destroyer – your boat sails along the top of the screen dropping shots down into rows of horizontally swimming sea monsters, some of which are shooting up at you.

The story, from the game's manual: 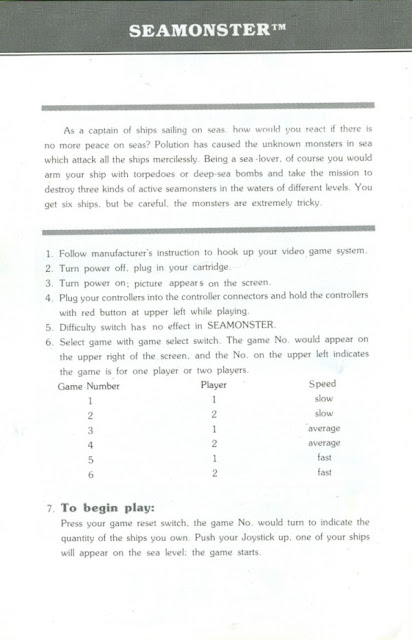 Spoiler: the monsters are not, in actuality, extremely tricky. They swim at a constant speed at three depths, and those at the top and bottom depths fire missiles up at you with incredible regularity.

This isn't at all unexpected; it's an Atari 2600 game, and there's not a lot of variety possible in what were originally budget titles. Unlike in the aforementioned Depth Charge and Destroyer, you don't need to select a depth at which your bombs explode or hit the button again to trigger them; firing when you have a shot on the screen simply makes the first shot vanish.

The challenge in the game comes from leading your shots to hit the monsters at different depths, and since the speed, timing, and patterns are constant, you get a hang of this quickly. It's fun, at least for a little while, but the lack of variety gets to you, and I found myself aborting mid-run to check out the other speed levels.

There are three – slow, medium, and fast, and I almost want to say that slow is the hardest because you need to lead your slow-moving shots so far in advance, but it's trivially easy to avoid the shots the enemy monsters are throwing up at you. It's probably just the least interesting.

Medium speed seems like a good target for casual gameplay, though I wouldn't say that Fast is too much harder, you just need to stay focused because the shots are coming so fast. They're still easy to avoid, but it's also easier to get tagged if your focus drifts because the game is so regular that it has a tendency to lull you.

On to the graphics. The game doesn't look bad. The wave motion on top of the screen is cute, and there are even bubbles – though the fact that they're orange left me wondering what they were for awhile, because I couldn't shoot them and they didn't seem to be coming after me. I would have personally made them cyan or just left them out entirely.

Your ship looks like a ship and the enemies are distinct, but most importantly there's no flicker. The designers did a good job deciding how many objects the game could handle.

The sound is... well, it's just there. I wish there was some music to break up the extremely regular sound of the enemy shots being fired precisely on schedule. They're all VERY atari beeps and boops.

All in all I'd say Sea Monster is a steady C of a game, maybe even a C-plus; better sound design or some variety in the speed of the enemies on any given level would push the game into 'B' quality. As it is, it's not really capable of sustaining interest for more than a few minutes... but those few minutes will be well spent.