The Portopia Serial Murder Case is the first graphic adventure games released for the Famicom, and considered by many to be the first visual novel adventure. It's creator, Yuji Horii, was inspired by the western Text Adventure genre to create similar products for Japan, and came up with innovations in both parser and non-linear storytelling.

The initial 1983 release of Portopia was developed for several Japanese personal computers, and in 1984 Horii developed a graphical menu-based command system for use in its sequel Okhotsk ni Kiyu: Hokkaido Rensa Satsujin Jiken. This menu system was implemented in the Famicom port of Portopia Renzoku Satsujin Jiken and developed further in what might have been Yuji Horii's most famous creation – Dragon Quest.

So, essentially, this game is the ancestor of adventure games on the NES, visual novels, and the JRPG genre.

But Matter of Import isn't about games' historical significance, it's about the games themselves. Is Portopia any good?

First, let's talk about the story. You take on the role of a silent protagonist detective in charge of investigating the murder of a bank president who was discovered stabbed to death, locked in his study. Aiding you in this matter is your more talkative assistant Yasu, who you command to interrogate subjects, search areas, and gather clues.

It's a fairly mature story, with elements of murder, suicide, and exotic dancers – probably why it never saw a US release due to Nintendo of America's strict moral guidelines, and the perception that US console audiences wouldn't be interested in this sort of game. And who knows, maybe they were right.

The structure is very open – you find clues that open up new locations and characters to investigate – but at the same time sparse... the individual text passages are short, though given the size of the screen allocated to the graphics that's understandable – and the pictures make up for a lot of the detail.

The menu interface is pretty decent – more contextual than the verb/noun menus that Maniac Mansion would bring to the NES two years later. There are two menu screens, and you switch between them with the B button. This gives you a nice set of options.

Dial Phone allows you to make phone calls. Note that you need to actually know – and have written down – the number to call them. Additionally you can dial real numbers active in 80s Japan, like 110 for the police emergency line, or 104 for directory service. The game will, of course, assume you know these numbers.

Close Case closes the case – if you're wrong about who the murderer is, the chief will reopen it. There is no game over in Portopia Renzoku Satsujin Jiken.

For the most part this works well – clues tend to lead logically to one another in a reasonable way. The few places where gameplay falters – where I found myself scratching my head and eventually resorting to a walkthrough – are additions to the Famicom version.

First, the Examine Thing has a magnifying glass object that lets you pick an area of the screen for Yasu to search. This isn't quite a hunt-the-pixel puzzle as there are, in most cases, no indications that there's anything to be found – a photograph of the victim can be discovered by clicking the lower right hand side of a cabinet. You can find a lighter by clicking under a table. A suicide note, not pictured on the screen, is found below a suicide's dangling feet.

The second obnoxious element is a first person maze added to the endgame that puts you into a Wizardry-style grid-dungeon you need to navigate with the D-Pad. There are no monsters, but navigating these is tricky, and it is an unnecessary deviation from the gameplay we've seen in the rest of the game.

The addition of these elements took a lot away from the experience and left me floundering and clicking around randomly – not really the murder mystery experience I was expecting. I ended up playing Portopia Renzoku Satsujin Jiken for slightly over an hour – without getting stuck, you can probably play through the game in half that.

Taking only the gameplay experience into account, and comparing the game to other graphic adventure titles on the Famicom, I'm going to give the game a C ranking. 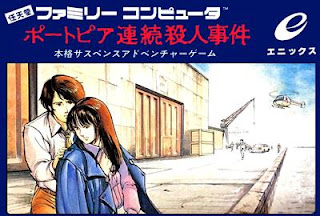