Lilly Adventure is a hard hard game. It starts out simply enough, a flick-screen platformer that has you jumping over sets of enemies while trying not to bash your head in on a bat flying overhead, and soon enough adds gaps in the bridge you're crossing and gators and turtles you need to use as stepping stones.

In some ways it's an early precision platformer, but Lilly's jumps are absolute. Tap the button, press the button, hold it down, doesn't matter, you jump the same floaty duration, thankfully able to control yourself fully all the way. I think that if the jumps were better managed – if they felt better – Lilly Adventure might qualify as an 'A' game, but the frustration over the way she controls is a definite minus. 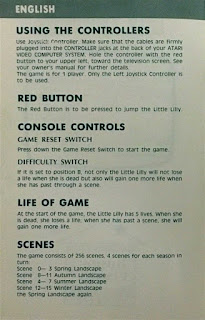 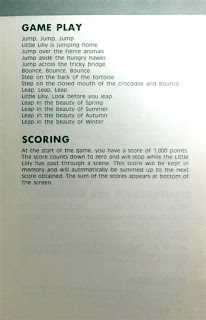 The levels themselves are varied enough that there's a sense of discovery whenever you manage to make it past the current screen, leading to anticipation and a reason to keep playing. The manual claims 256 scenes, four per season in turn, leading to 16 basic variations – I can only assume that beyond that the 16 basic scenes cycle, perhaps with faster speed for the enemies. I don't know, as comparatively fun the game is I don't think I'd have the patience to play for 256 full boards.

Fortunately, one of the difficulty settings lets you play without losing lives.. though the fact that even on the normal difficulty awards an extra life for every screen passed means you'll get a long play session in, even if half those lives are squandered on a particularly frustrating scene – it feels like the enemies are spaced just far enough apart that it's tricky to time jumping over one without landing on the next, and too far apart to make a leap over two. Trying to jump a chasm without hitting the bat before the next set of enemies arrives makes up a good chunk of the game's challenge.

The game has some of the most varied background music I've heard in any Atari 2600 game – each song themed to its season, switching by scene. It's not great music, of course, this is the Atari we're talking about – but it switches up enough to avoid becoming repetitive.

Lilly herself is fairly detailed for an Atari 2600 sprite, and is one of the few female protagonists you see in the console's games. Pink skirt, white socks, black shoes in an era where most sprites were one single solid color – like, unfortunately, the enemies in the game, but aside from the spear carrying maybe-gingerbread men, they're somewhat identifiable for what they are.

All in all, I'd give the game a B. An 'A' would be something like David Crane's Pitfall, and Lilly is not nearly as fun or competently produced. Just in comparison with the other import 2600 games we've been playing in this series, it's a B, and probably the one I've enjoyed the most so far.
at February 04, 2021

Email ThisBlogThis!Share to TwitterShare to FacebookShare to Pinterest
Labels: 1983, Atari 2600, B