Forest is a 1983 game from Sancho that has the player, a woodcutter, attempting to chop down trees in a forest full of cursed animals. In each round you have to traverse two screens of animals rushing at you from the sides that you either have to leap over or strike with your axe, and a third screen where you have to chop down a tree in order to progress to the next round. 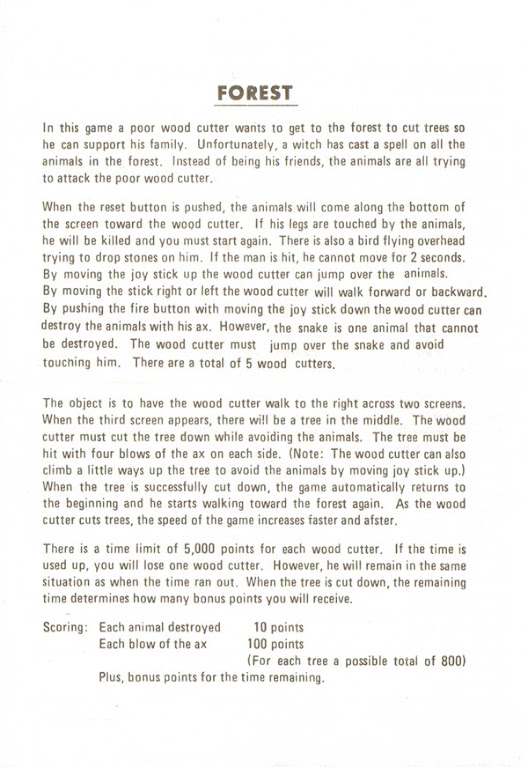 Controls are simple – left/right to walk, up to jump, button to swing your axe. Undocumented feature not mentioned in the manual – the animals are small, so you have to hold down while swinging to actually hit them. Would have been nice to know, because they kill you in one hit and you have to start all the way at the first screen again.

You have a weird floaty jump that's just good enough to make it over the wider enemies, and in most cases this is easier than hitting them with your axe, especially as they get faster in subsequent rounds.

The game does have music in the background, but I feel that some kind of transition after cutting down the tree would have been nice, even if it were simply a flashing screen and a victory riff. Instead, the moment you're done, you warp back to the beginning.

Forest isn't a fun game. The rounds are simple and quick, but don't really offer much in the way of variety, even for the console. Maybe a fan of forestry or hitting animals with an axe would get a kick out of it, but I'm compelled to give it a D rating.