Given how much I love games is it really any surprise that I'm kickstarting one? 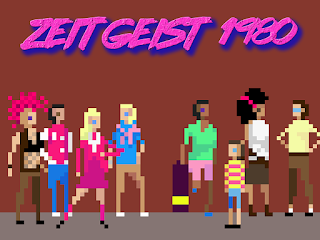 Zeitgeist 1980 is an interactive fiction game set in the world of cinematic 1980, drawing inspiration from classic movies, television, and cartoons of the year. It's broken up into four episodes, released as a serial and building off of one another, each drawing from different shows.
Ultimately the goal is to create an epic story that spans the entire decade, with dozens of episodes that get to the bottom of just what makes the 80s so radical.
This campaign will be running until March 15. If you like low res pixel art, interactive fiction, the 80s, or some combination thereof, consider supporting the project. Thanks!
at February 15, 2021